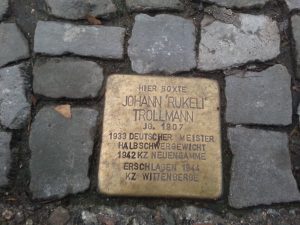 The whole thing backfired. It was his pride that made him win that fight. The more they tried to crush him into oblivion, the harder he fought, and instead of forgetting about him, people couldn’t get him out of their heads.

In the beginning, yes. But then I thought that losing control like that…

Thousands of people had seen him dance…

…in public, betraying the fact that all of his elegance was just a pose…

…which was incredible, as if every drum in the world rolled to the tattoo of his fists, and his legs darted back and forth between the ropes like the fingers of a jazz musician on the strings of a double-bass.

…which crumbled to reveal his true personality … In other words, he’d shown that breeding will always out.

There’s plenty of oysters in the sea, but only a few of them contain a pearl. The whole world was watching when Ali beat Foreman in the Rumble in the Jungle, but Rukeli pulled the same trick on me forty years earlier, making me believe I was winning and then finishing me off at the end. And we’re talking about Ali, the greatest psychologist in the history of boxing.

This play is an imaginary biography, set in Nazi Germany, which blends theatre, music and cinema to tell a story based on the life and death of Johann ‘Rukeli’ Trollmann, the gypsy boxing champion whose success infuriated the Nazis.

Johann ‘Rukeli’ Trollmann was a charismatic boxer, a sex symbol and a dancer who achieved fame in Germany in the late 1920s. The pioneer of a distinctive style that Muhammad Ali would later make his own, he won the national light-heavyweight belt in 1933, but shortly afterwards the Germany Boxing Federation stripped him of his title for “inappropriate conduct”. Despite being fully aware that this decision was motivated by racial prejudice, Trollmann accepted a rematch against Gustav Eder, a heavyweight for whom the Reich rigged the scales to enable him to drop down a division and teach Trollmann a lesson. What followed was both a tragic farse and, arguably, the greatest victory in the history of boxing.