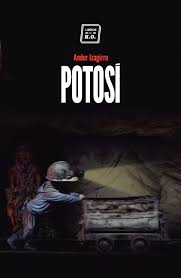 “A woman can’t enter the mine,” Pedro Villca tells me. “Can you imagine? The woman has her period and Pachamama gets jealous. Then Pachamama hides the ore and the seam disappears.”

Villca is an old miner, an unlikely combination in Bolivia. He’s 59 and none of his comrades have made it to his age. He’s alive, he says, because he was never greedy. Most miners work for months or even years without a break. Most miners end up working 24-hour shifts, fuelled by coca leaves and liquor, a practice for which they have invented a verb, veinticuatrear: ‘to twenty-four’. Instead he would come up to the surface, go back to his parents’ village for a few months to grow potatoes and herd llamas, fill his lungs with clean air to flush the dust out of them, and then go back to the mine. But he was never there when his companions were asphyxiated by a pocket of gas or crushed by a rockfall. He knows he’s already taken too many chances with death and that he shouldn’t push his luck. So he’s decided to retire. He swears that in a few weeks’ time he’ll retire.

Alicia opens her fist and shows me three stones the colour of lead, speckled with sparkling spots: particles of silver. She has pilfered them from the mine.

She wraps the stones in newspaper, puts the package in her backpack and disappears behind the canvas sacks to change her clothes. She takes off the overalls and puts on some jeans, a blue tracksuit top and a knitted hat. She grabs the backpack, and we leave the hut and walk downhill.

She’s 14 years old, and her hands are dry and tough, bleached by the dust of the mountain.

The wind sweeps the slopes: fragments of rock scatter before it, the rubble groans. The dust of Cerro Rico gets in your eyes, between your teeth, into your lungs. It contains arsenic, which causes cancer, and it contains cadmium, zinc, chrome and lead, all of which accumulate in the blood, gradually poisoning the body until it is exhausted. The dust also contains silver: between 120 and 150 grams of silver for every ton of dust. Every visitor takes away a few particles of Potosí silver in their lungs. It’s because of these particles, the need to separate them from all the others, that Alicia lives in an adobe hut on the mountain.

In Potosí, Ander Izagirre tells the story of Alicia, a 14-year-old girl who lives on the slopes of Cerro Rico de Potosí, the mineral-rich mountain in Bolivia whose silver and other metals were a key source of wealth for the Spanish Empire from the 16th to the 19th centuries. Alicia shares an adobe-brick hut with her mother and younger sister on a windswept esplanade at the entrance to the mine which dominates their lives. The mining cooperative provides Alicia’s family with their makeshift home in exchange for her mother’s work guarding the equipment that is stored in a nearby hut; although Alicia is officially too young to be employed, she supplements the family income by working shifts in the mine, pushing a trolley full of rocks through underground tunnels for 2 euros a night. The toxic dust of the mine floats in the air they breathe and seeps into the water supply.

At the foot of the mountain, the city of Potosí, for so long a source of fabulous wealth, remains a place of immense poverty. Atlhough the rich seams of the past have all been exhausted, there are still over 10,000 people working in the mines (many of them children like Alicia) in small-scale, informal operations. They remove the rock by hand and transport it to the surface, where US and Japanese-owned multinationals grind it down and process it to extract the remaining ore. The resultant damage – both to the environment and to those who live and work in or near the mines – is devastating.

Izagirre skilfully uses this intimate portrait of a single family and the place where they live to tell a larger story: how the ‘blessing’ of mineral wealth has cursed Bolivia throughout its history, attracting the Spanish conquistadores who created a system of slave labour to extract the metal, and giving birth in the 19th century to a brutal local oligarchy that ruled over one of the poorest and most unequal countries on the planet. The country’s modern history has been marked by a series of military dictatorships, often installed with US backing with the express purpose of guaranteeing the flow of raw materials, and the economy remains extremely vulnerable to any fluctuation in the prices of tin and other minerals.

At the same time, this is a narrative that is not afraid of confronting uncomfortable truths, and Izagirre shows how the terrible working conditions and appalling safety record of the mines have not only caused the deaths of hundreds of thousands of miners through the centuries, but have spawned a patriarchal social system in which the miners, brutalised and traumatised by their experiences and numbed by alcohol, pass this on to their wives and children in the form of violence and physical and sexual abuse. This system has its symbolic focus in the figure of El Tío, a diabolic subterranean male counterpart to Pachamama, the Andean earth goddess, and goes hand in hand with active attempts to exclude women from the public and political spheres.

Although the story of Alicia and her family are at the centre of Izagirre’s account, he interweaves it with accounts of the lives of several other people: Pedro Villca, at 59 an ‘improbably old’ miner who is the author’s guide in the mines; Father Gregorio, an Oblate priest from northern Spain who was sent to Bolivia in the 1960s to run a Catholic radio station, and was hounded by the authorities for siding with the poor; Che Guevara, who died in a doomed attempt to light the fuse of a peasants’ and workers’ revolution in Bolivia; and Klaus Barbie, the Nazi fugitive who took refuge in Bolivia and put his skills to use by organising death squads on behalf of the CIA-backed dictator, General Barrientos.

The result is a uniquely engaging mixture of memoir, reportage, travel writing and history that is reminiscent of Ryszard Kapuściński at his peak.