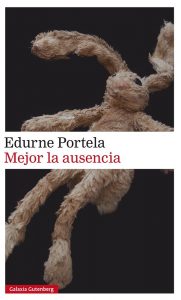 Mejor la ausencia is a compelling coming-of-age story set in 1980s Bilbao against the backdrop of domestic violence, petty crime and political conflict, told through the eyes of an absolutely engaging first-person female narrator:

We reach the huts where there are men with guns. Mum turns round and tells us to be quiet. I ask why. Dad takes out the little books and shows them to the man. Another man comes up to mum’s window and pokes his gun into the car. Mum says, “Please, the kids.” The man doesn’t say anything, he just looks at us. Aitor sticks his tongue out at him and the man says something to my mum and I don’t understand but it’s a nasty word because dad insults him afterwards, he says something about a bastard but the man can’t hear him because we’ve left. Mum tells Aitor off but dad says he did the right thing. We arrive at Uncle Josu’s house and dad gets lots of things out of the boot. Uncle’s very pleased and so are his friends, the men with the beards. Uncle Josu strokes my head and tells me I get prettier every day and more grown up.

New Year’s Day. What a pain. Gran’s coming. Aitor and Kepa are in bed. Kepa came home drunk at nine o’clock in the morning. Aitor must have got in earlier. So I have to help mum lay the table and no doubt I’ll have to tidy up afterwards. I put the king prawns on the plate. Their heads are black. The door rings. Gran’s here. She comes into the kitchen.

She stretches out the ‘seven’. And claps, as if there was something to celebrate.

I go over and kiss her. She has hairs on her upper lip and on her chin.

“At this time of day? What about your mother?”

I haven’t been back to my mother’s house since the day she said my father was returning, after God knows how many years. Ten? Fifteen? She’s stayed in touch with him all that time and never stopped taking his money. I’ll never understand their arrangement, my mother’s need to maintain the link, my father’s presence in her life despite the abuse, the neglect, the absence. For my mother, it can’t just be about money, there must be something else; and for my father, it can’t just be about controlling her. I search through my memories, and come across scenes that seem fake: the two of them smiling and complicit as they listen to me telling my grandma that the Three Kings had visited our house, when I was five; holding each other’s hands as they walk on the beach at Biarritz; my father calling her ‘lioness’ and stroking her wild red hair. I remember stories my mother told me about when they were young and in love and my father made her laugh with his antics. Yes, those memories are there, but what use are they to me?

The novel is set in a town on the industrial outskirts of Bilbao during the 1980s, marked by heroin, unemployment and industrial decline, where the police fight running street battles with local youths, and the walls are covered with threatening slogans. Its narrator, Amaia, is a young child at the start, and progresses through adolescence to adulthood as the action unfolds. The youngest of four siblings, she describes the gradual destruction of her family by the violence that surrounds them.

Amaia’s father begins the novel as a supporter of Basque independence (and perhaps a petty criminal as well) but when, under duress, he is ‘turned’ by the Spanish security forces, the effects on the family’s life are devastating. Humiliated by his handlers and rejected by his former comrades, Amaia’s father turns his violence inwards on his family before abandoning them, forcing them to rely on the grudging support offered by Amaia’s maternal grandmother.

Amaia’s mother retreats into alcoholism and remains dependent on her abusive and absent husband. And each of Amaia’s brothers seeks a different way out: the eldest becomes a drug addict and dies of an overdose; the next leaves for university in Madrid and cuts his ties with home; the youngest throws himself into political violence and ends up in prison. Caught in the middle is Amaia, who has to go through adolescence with little or no support from those around her, and yet is somehow expected to maintain the fragile ties between the members of this dysfunctional family.

The final section of the book takes place in 2009, by which time Amaia is an adult and is trying to make sense of her life and how it has been shaped by violence and conflict. After an absence of 17 years, she returns to her home town and seeks to make peace with her past by understanding and writing about what she been through.

Edurne Portela controls Amaia’s voice brilliantly, and one of the effects is to make the reader feel as if she is accompanying Amaia, not just observing events and emotions. The main challenge for the translator is to reproduce this voice, and to ensure that the translation reflects the way that the voice evolves as Amaia progresses from early childhood through adolescence to adulthood. An additional issue is the use of occasional Basque words in the original Spanish text to convey a sense of place and to communicate the atmosphere of working class Bilbao in the 1980s. The translation sample included with this proposal show how both of these challenges can be addressed successfully.

Edurne Portela (b. Spain, 1974) has written extensively about the impact of violence and trauma on women’s lives. After a successful academic career in the United States, she returned to Spain to pursue a career as a writer. In 2016 she published El eco de los disparos (The echo of gunfire), an exploration of the culture and memory of violence in the Basque Country. Mejor la ausencia is her first novel.

“A bitter, painful and challenging tale, about a Spain that was divided between the cultural awakening of the 1980s, violent nationalist struggles, European integration and the continuing influence of Francoism…” A. López, La Razón

“A generational novel about silence, fear and literature as a weapon that helps us to imagine and examine our memories, to put a face and a body to the ghosts of the past, to unnamed fears and to unformulated intuitions.” Pilar Castro, El Cultural

“One of the most striking achievements is how the sensibility and the voice of the narrator evolve from the first pages, when she is only five years old, passing through the harsh irritation of adolescence, until she reaches adulthood, in 2009, and looks back over the past in an attempt to understand it.” Santi Pérez Isasi, Un libro al día