Although I was pleasantly surprised by the overwhelmingly positive reaction to my last blogpost, it wasn’t universally liked. (No bad thing: if nobody disagrees with you, what you’ve said probably wasn’t worth saying.) The most substantial criticism was a remark on Twitter to the effect that it was unethical of me to criticise a fellow translator’s work without giving them the right to reply.

I don’t agree, but I don’t think it’s a trivial point. After all, I can certainly imagine criticising a colleague’s work in an unethical manner, so what are the defining features of ‘ethical translation criticism’?

Let’s get the ‘right to reply’ issue out of the way first. There are several objections to this.

There’s no other sphere in which we would apply this test. We don’t demand that writers critically reviewing a colleague’s novel offer a right to reply, or that the retired footballer who comments on the state of play at half-time offer a slot to the goalkeeper who has just conceded a soft header. (In fact, there seems to be general recognition that the book review industry is already in something of a crisis due to friends and acquaintances reviewing each other’s work. I think we can all guess what would happen if you had to get the author of the reviewed book on board as co-author of your review every time you wanted to say something negative.)

There’s something slightly worrying about the phrase ‘fellow translator’. Does this mean that the stricture only applies to reviews between translators? (I’m guessing so because in practice there would be no way of enforcing it on writers and commentators who publish reviews in the press.) I’m all for a bit of solidarity but this arrangement smacks more of the medieval guild than of the trade union.

I’m also unsure how the rule would work in practice. I don’t have a hotline to Ann Goldstein (the subject of my last piece) or any way of contacting her. Applying this rule would at best slow down the work of low-status critics like me and at worst simply render it impossible. (The ‘same’ bar, needless to say, would be far lower for a well-connected translator or someone writing in a commercial publication. Make of that what you will, but to me it smacks of one law for the powerful and another for everyone else.)

This brings me onto my next point. Ann Goldstein already has a right of reply, if she wants it. She has direct access (as far as I know) to the Guardian and the New Yorker, and I’m guessing she could easily contact other publications as well. If she decided to post a blog I think it’s fairly certain that it would have greater reach than the double-figure retweets and handful of likes that is the most my own humble post can aspire to.

My last point is very straightforward. My post was my piece of writing. As long as it is not unethical in other ways (see below), then it is for me and me alone to decide what I write and whether or not to invite others to participate in that process, to respond to it and so on. By posting on social media, I am already providing a platform where anybody who disagrees with me can reply if they so wish.

I hope I’ve convinced readers that the right of reply is an ethical red herring (and one which would, if applied, have the effect of making criticism virtually impossible), so let’s get on to the broader issue of what might constitute ethical translation criticism. Anyone who read my last piece will know that I like a good maxim, so here goes.

Don’t say things that you don’t believe to be true or for which you have no evidence.

Don’t use accurate examples to paint an overall picture which is misleading. Anyone can cherrypick the odd mistake from a full-length novel or quibble with specific phrasings in a text which is generally well written.

It’s easy to take a swipe at a translation, but if you’re going to criticise it then you need to show why (in your opinion) the translation is unsuccessful. You can’t just say “the translator gets things wrong” but have to show what those things are and explain why. An intelligent reader should be able to read your criticism and dispute your conclusions on the basis of the evidence you provide.

If you’re criticising someone’s translation, stick to the text. There may be grey areas; if the translation appears to be poor because of lack of knowledge of the source language, then it’s obviously okay to discuss that and even to produce biographical evidence to back up your point, but that shouldn’t be used as a pretext for character assassination.

If you believe you have shown that a piece of work is truly awful, it’s legitimate to reach strong conclusions on that basis. If all you have identified are a few minor slips and the odd stylistic infelicity, then it would be unjustified – and unethical – to reach a damning conclusion.

All of which leaves me a little perplexed as to why some have taken exception, in principle, to my expressing strong criticisms of the work of a named translator. I think that the problem – as we translators love to say – is context. Perhaps a joke might help to understand what is happening.

A community of nuns live in a closed convent. The community has a strict rule of silence which is only broken once a year, on Christmas Day, when one nun is allowed to stand up at the end of the meal and utter one sentence.

At the end of Christmas dinner on the first year, Sister Antonia stands up. “I don’t like the food,” she announces. She then sits down and the convent lapses into total silence for another year.

At the end of Christmas dinner on the second year, Sister Josephine stands up. “The food’s alright,” she says. She then sits down and the convent lapses into total silence once again.

At the end of Christmas dinner on the third year, Sister Agnes stands up. “I’m leaving,” she declares. Her fellow nuns are so shocked by this revelation that they forget their vow of silence and all shout “Why?” in unison.

To which Sister Agnes replies, “There’s too much arguing about the food.”

Instead, literary translation talk (at least on social media) is dominated by prizes, books, grants, conferences and the like. And most direct comments  on translations take the form of encouraging remarks: “Another fabulous translation from the talented…”

That’s nice, of course, but it means that when someone expresses critical opinions about a fellow translator’s work, there is something slightly shocking about it, as if a taboo had been broken. The critic, to quote Billy Connolly, can feel about as welcome as a fart in a spacesuit.

The best response to this problem, in my opinion, is not to strengthen the taboo further, but to fill the critical silence with translation chatter. (Or, to stick with the Big Yin, to accept that the odd fart is a price well worth paying if we are to reach the moon.)

I’ve tried to do this myself by consciously engaging with authors, fellow translators and source language readers in the discussion of issues I’m struggling with in whatever text I happen to be working on at the moment. Perhaps if we all did a bit more translation talk, we wouldn’t be quite so shocked to hear the occasional critical opinion.

In the meantime, here’s a picture of some nuns: 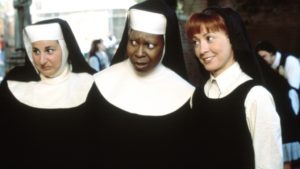