The following post is based on an article I co-authored for the ITI Bulletin with my colleagues Victoria Patience and Simon Berrill.

Peer pressure: how collaborating with colleagues can be a great source of professional development

Amid all the talk of continuing professional development, translation technology, marketing skills and subject specialisation, it’s easy for us to lose sight of our biggest asset of all: the connections we can make with our fellow translators.

Tim Gutteridge, Victoria Patience and Simon Berrill all work from Spanish into English, and they’ve established a successful collaborative arrangement that spans three countries and two continents and provides them with detailed feedback on their work, career development tips… and even a bit of life coaching!

In search of quality

Tim: I’ve been translating full time for nearly twenty years but for much of that time I’ve worked in near isolation. I’d been to the odd meeting and occasionally worked with colleagues (either outsourcing or, less frequently, working on large projects together where there was some editing and feedback) but my work paradigm until quite recently was basically to fly solo. Then, in late 2016, I received a message from Victoria, a colleague I’d connected with on Twitter, asking if I’d be interested in joining a group that she was setting up.

Victoria: Around the time I wrote to Tim, I’d been hearing a lot of online talk about quality. Quality as a market strategy, quality as a way to prevent our jobs being taking by robots, quality as an end in itself. Although my clients seemed happy with my work, I had the feeling that I was churning out stuff that was good enough but no better than that. I wanted to improve the quality of my work – but how?

Simon: At the same time, but quite independently, I wrote a blog post on the issue of quality which I published under the title ‘The Quality Conundrum’. Like Victoria, I had a feeling I was producing translations that weren’t really good enough, but it seemed difficult to do very much about it.

Ideally, I would have all my translations edited by a second person, but constraints of time and money mean that’s a luxury I can rarely afford. However, without that critical editing process it’s easy to drift along and never really improve. In my post, I suggested various ways in which I might be able to improve quality, one of which I described as ‘sample reviews’. The idea was to team up with a colleague and each would review samples of one another’s work free of charge.

Victoria: I already work with a partner, María Inés Martiarena, who translates in the opposite direction to me, and we sometimes review and comment on each other’s texts. After reading Simon’s post it occurred to me that doing a similar exercise with other Spanish to English translators might be beneficial. So I wrote to Simon and also to Tim, whose tweeted translation tips were already improving my work.

Tim: When Victoria got in touch, I was already thinking a lot about the issue of quality. In particular, I was struck by the way that translator talk on social media and blogs seemed to be dominated either by a very technical approach to quality (focusing on technology, terminology and subject specialisation) or sidestepped the issue altogether in favour of discussion of business issues such as marketing and rates.

All of these are important, of course, but unless you can unpick complex ideas in the source language and express them in clear, elegant sentences in the target language, then all the technology, terminology and marketing in the world won’t make you into a good translator.

Simon: Before we actually started revising each other’s work, we exchanged a few emails to make sure we were on the same page. We were all clear that feedback needed to be robust and that it would be a waste of time if we held back for fear of causing offence. Other than that, we decided it would be best to take an open-ended approach, just sending each other work and seeing how it developed.

Victoria: We each take it in turns to send the other two a short extract of something we’ve translated, both source and target texts. These are mostly finished translations that we’ve already sent to clients, although occasionally we work on ‘live’ texts, confidentiality permitting. The two revisers have a week to send corrections, suggested changes and comments. This feedback process usually takes about an hour.

Tim: Although we refer to it as ‘revision’, we’ve deliberately been quite free in our approach. Each of us has our own style: Victoria tends to give texts a very thorough edit, I’m a bit more discursive but with less attention to detail, Simon is probably somewhere between the two extremes. Despite this, we almost always seem to focus in on the same issues in each text we review and we generally suggest similar solutions.

It’s also important to understand that the process is not really about improving specific translations. After all, most of the texts we work on are ‘dead’ in the sense that they have already been submitted to clients. Instead, our focus is on building our skills as translators so that we can produce better work in the future.

Victoria: We quickly went beyond giving advice on word choices and the flow of texts to discussing other things translators often grapple with alone, like rates, marketing and specialization, and from there to raising bi- or trilingual children, fitting work and family together, local politics, and our shared love of single malt.

Tim: When we first started out, I think we probably expected to identify a list of our own weaknesses: typical mistranslations, specific structures that we tend to overuse or misuse, that kind of thing. There has been a little bit of that, but for me the main benefit of regularly giving and receiving feedback is that it has made me much better at critically reading my own work. I often find myself looking at a sentence or a particular phrasing and asking myself, ‘What would Simon or Victoria think of that?’

Simon: I’ve had the same experience as Tim. When I’m translating a tricky text I often now imagine Victoria or Tim looking over my shoulder and encouraging me to cut a word, rework a sentence or look a bit further for exactly the right solution. I’ve learned that even translations I consider good can sometimes be ‘undercooked’ and need a little more work. It’s also been a good experience in terms of learning to take criticism – something I’ve never been particularly good at! But there’s a mutual trust involved in this kinds of exercise that puts us all on equal terms. I don’t always agree with what the others say, but I know that any criticism is constructive. And I often find myself nodding in agreement as I read their comments.

Victoria: We did consider expanding the group at one point, but in the end we decided that three was the perfect number: communication is manageable, you get more than one person’s feedback on each text, but don’t have to wait too long for it to be your turn to be reviewed.

Simon: Recently we’ve decided to vary the format and do the occasional translation slam, where we each translate the same text and then compare the results. Although it sounds simple, this is actually more difficult to structure because we really want to do more than just look at each others’ efforts and nod. We prepare our translations separately, then compile them into a four-column document to make it easier to compare the different translations. This then provides the basis for a videoconference where we analyse our translations, discuss the differences, and talk about any aspects we found particularly challenging or solutions that work well.

Tim: When we talk to other translators about this, they tend to assume it’s basically an arrangement for swapping proofreading services. But it’s really much more about professional development: improving our skills as translators, and having a place where we can share ideas with trusted colleagues. One simple example of how it’s changed my practice is that, after talking to Simon, I realised I could probably boost my output without compromising on quality. It’s easy to ignore other people’s claims of how many words they translate per day, but when the person telling you is a respected colleague and you can see the quality of his work, then you are less inclined to be dismissive and more likely to be inspired to up your own game.

Simon: We’ve got to know quite a bit about each other’s very different lives, too, which helps build trust and gives the three-way relationship a warmer, human element. When more people started asking to join us, I set up a Facebook group, the Standing Up Revision Club, to help match up others who want to establish their own, similar arrangement. More members of the Facebook group are very welcome – we hope it will lead to more translators connecting to improve the quality of their work.

In his essay, Politics and the English Language, George Orwell railed against confusing and unclear writing. 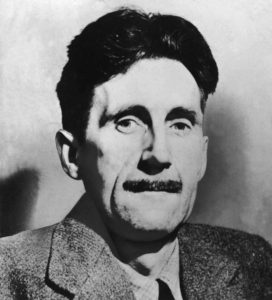 He summarised his advice in six rules, which have been the mainstay of English style guides ever since:

Unlike writers, translators are constrained by their source text. (I also bridle at the absolute nature of Orwell’s rules.) So I have adapted them for translators: